Ever walk around and can’t help but see Muppet Doppelgangers everywhere you turn? Just about everyone grows up watching the Muppets and these silly and fuzzy puppets are a childhood staple. Call it conditioning and coincidence, but it just seems as if Muppets are everywhere you look!

Many celebrities have a Muppet look alike and you can have a lot of fun assigning your favorite celebrities to a Muppet counterpart. Some of the biggest celebrities around look just like Muppets! It’s so much fun realizing how many of your idols, favorite athletes, and beloved actors look like goofy Muppets.

Ever watch a Seth Rogen film and think you’re watching a Fozzie Bear sketch? Perhaps you can’t stop thinking of Jimmy Kimmel and Adam Carolla when you see Ernie and Bert.

The more you look for it, you’ll realize a ton of actors look like they could be real life Muppets walking around. It doesn’t take too long to identify actor Steve Buscemi with that whacky and wild Pepe the Prawn. Both are red, unintelligible, and just straight up bizarre!

Ben Affleck, of Argo, The Town, and so much more, could find work filling in for The Newsman on The Muppets if he ever wanted. 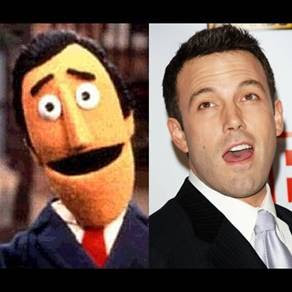 Celebrity fashion designer Donatella Versace looks like a cartoon character already, so it doesn’t take much to imagine her as a silly puppet. Take a look at the musically inclined Muppet Janice. Janice and Ms. Versace look amazingly similar, so much so in fact it’s scary! 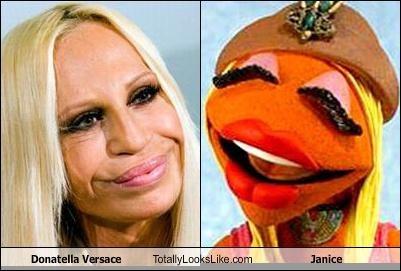 America’s garbage mouth, Don Imus give us an “uncanny” resemblance to Oscar the Grouch.

You can make a hilarious impression showing up to a celebrity themed costume party dressed up as a Muppet celebrity look alike. Everyone will get a real kick out of it! But celebrities aren’t the only ones that have Muppet Doppelgangers.

We carry all of the most familiar and favorite Muppet costumes so you can find the character that best represents you. In fact, this is an even better idea considering the upcoming release date of Muppets Most Wanted, the new Muppet film coming out on March 21st. The new movie looks great and should be a lot of fun for kids and adults alike. The Muppets enjoyed a revival of sorts after their 2011 film release, The Muppets. The Muppets have always been popular with kids, but the film reintroduced the characters to many adults. Now, Muppets are all over the place!

Do you know a close friend or relative that looks like they should be hanging out with Kermit? Or maybe even you yourself share a characteristic or two with one of Jim Henson’s famous creations. An absolutely gut bustingly funny party idea would be to have all of your friends come over dressed up as their closest Muppet Doppelgangers!

Whether it’s close or a bit of a stretch, this is a really fun idea that everyone will enjoy. You can have a physical characteristic in common with a Muppet, but a personality trait works just as well. Know a grumpy and stubborn old man? Here is a link to underfed inhalation. Make him dress up as Oscar the Grouch! This is a fun idea that lets you and your friends poke a bit of fun at their own expense for a really great party.

Browse through our collection of great Muppet costumes and pick out the ensemble that best reflects your Muppet doppelganger!